Born December 17 in Hrusice, a village 30 km from Prague in Posázaví.

He entered the three-grade school, which he finished in 1901.

For one month he studies to be a painter of walls and theatrical scenes in Prague.

He studies to be a bookbinder – gilder, with Mr. Karásek (he was awarded a vocational certificate in 1905), during his work he is acquainted with drawings and paintings by famous Czech painters and illustrators, he reads the works of classic Czech authors. He works in Prague.

After Christmas he painted two portraits for a stage room for an amateur performance of a theatrical play.

He attends evening drawing courses at the School of Applied Arts.

He becomes a good student of the School of Applied Arts, but soon leaves, partly for financial reasons, and because of an unsuitable form of study. He draws for various magazines, but as a student he use different pseudonyms. He illustrates his first children’s book “Pohádka o Honzíčkovi a zlatovlasé Isole”

He becomes the the editor-in-chief of the comedy magazine “Karikatury”.

He drew and published his first picture book for children “Moje abeceda”, which has since been published 23x. He started to draw animals.

He draws for the satirical magazine “Kopřivy”.

His second children’s book “Kalamajka” is published, with text by Jaroslav Hašek.

He drew for the evening newspaper “Právo lidu”.

“Ladův veselý přírodopis” is published; he redrew this book in 1950 with verses by František Hrubín.

The magazine “Šibeničky” starts coming out, collaboration with many illustrators.

Jaroslav Hašek ordered the drawing of the cover of the spreadsheet edition of “Osudy dobrého vojáka Švejka”. This was the only drawing that Hašek saw from all those that Lada made to accompany his work.

He became friends with painter Václav Rabas, in June he married Hana Budějická in Prague after an 18-year acquaintance.

In December his daughter Alena was born, later a known illustrator of children’s books.

He illustrated more than 110 books for children and adults and the work of Jaroslav Hašek. He also became a writer of children’s books.

In December his second daughter, Eva, is born.

He designed a series of theater sets and costumes for the National Theater, the Vlasta Burian Theater, and other Czech theaters.

He wrote and illustrated a book of memoirs “Kronika mého života”. In October Wolfgang Wolfram von Wolmar, supervising the printing protectorate, forbade reports on drawings made by Josef Lada. He was immediately expelled from the Union of Journalists. Until the end of the occupation his family lived on income from private collectors. He exchanged many of his works for food and other life necessities.

In February his daughter Eva died tragically in the bombing of Prague.

On September 9 he was named a national artist by the Government of the Czechoslovak Republic.

In January his wife Hana dies.

In June he completed his last painting and in July in Hrusice (where he would go for work holiday since 1924) his last drawing.

On December 14 Josef Lada dies in Prague and is buried in the Olšany Cemetery. 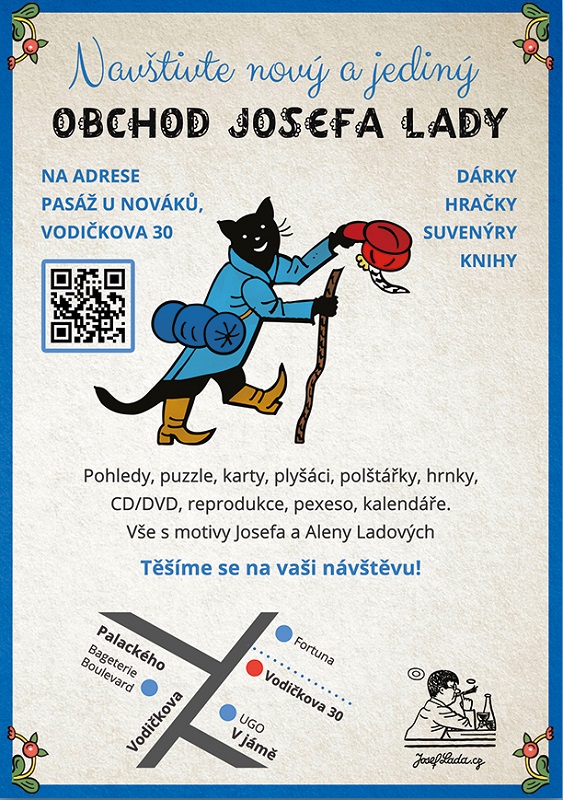