A timeless fairy tale book you’ll absolutely fall in love with just a few pages into the story. The character of Mikes, a little black cat from the village Hrusice, is unforgettable. He lives with the cobbler’s family and is friends with their sonPepík. Along with their buddies Pašík (pig), Bobeš (goat) and later also Nácíček (silly kitten), they joke around and go on various adventures.At one point Mikes decides to explore the world and the readers get to follow him on his crazy travels. He even joins the circus for a while! Eventually, he returns to his hometown, though, and enjoys his time with the children again. The book has two parts, written by Lada in 1935 and 1936.

Amusing story about water sprite Brcal and bogeyman Mulisak. The readers get to know everything about the joys and troubles they go through raising their children – little Tadpoleand Bubacek. Having worked tirelessly for hundreds of years, both fathers are now ready to retire. The sons, on the other hand, don’t seem to be willing to stop their carefree childhood games just yet.

A sly fox fares quite well at the gamekeeper’s lodge. It learns from humans how to read, talk and write. But when it grows up, it wants to leave. And leave it really does: the fox settles in the surrounding woods. And as it is very sly and adventurous, it carries out a number of unbelievable undertakings. It bets the local butcher Špejlík that he can’t make ham of certain quality – and wins it, of course – and does a number of crazy pranks all over the town at the same time… The book consists of traditional Czech rhymes, counting-out rhymes, and carols/melody lines. The book aptly captures the Czech rustic traditions, making them well preserved and accessible even to the youngest. Josef Lada’s brilliant illustrations pretty much contribute to this. 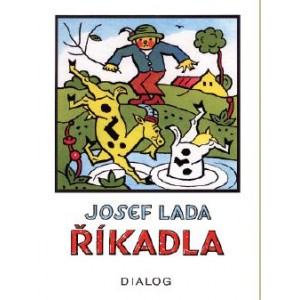 This is a jovial book wherein the illustrator turns the well-known classic fairy tales upside down. Truly unheard-of things happen in the six fairy tales presented in the book. In “The Brave Princess,” the daughter of the king saves a guy called Honza from hell, in “Cinders” a rich widow has three sons but does not treat the youngest one quite well… In the other narratives similar distortions of classic fairy tale motifs can also be found. One discovers what pranks the lazy Honza, the dragon, Budulínek or Mandelinka do or what happens in a poor kingdom. Playing with the Devil

This is a fairy tale/comedy based on the eponymous drama. It is considered by many unforgettable and a real treat for the audience. It tells the story of a retired soldier Martin Kabát who’s bold enough not to be afraid of Sarka Farka the terrible villain or hell full of long-horned devils. The story has so far been readily accepted by all generations and this trend seems to continue. It all starts when two marriage-seeking girls, princess Dišperanda and her maid Káča, sign a deal with the devil in exchange for fairy tales bridegrooms. Although both contracts accidentally get into the bold Martin Kabát’s hands, the treacherous devil Solfernus repossesses them, leaving Martin with no other alternative except to go down to the boiling hell. According to her father’s wish, Princess Jůlinka should marry. However, she is reluctant to do so and sets off instead from her birthplace of Královská Lhota on a journey. While wandering, she becomes friends with the bogeyman Mulisák and the water sprite Brčál. Together they save the life of the young artiste František Kuldan who later wins Jůlinka’s heart. It is in fact the circus where she feels the best.

The main character of this unusual fairy tale is an eight-year-old girl named Vendulka, whose parents never seem to have the time to play with her. She hears about this children’s book by Josef Lada on the radio and insists on getting it for her birthday. The book is full of fun rhymes and amazing illustrations, but Vendulka is especially fascinated by the big ink stain she discovers on the very first page. It turns out it’s a magic portal!
Whenever she touches it, it takes her straight the studio of Josef Lada, who shows her his work and talks to her about his fairy tales. Then one time, when Mr. Lada isn’t there, Vendulka plays in the studio on her own and finds out she can make some of the painted characters and animals come to live!
Vendulka then decides to share her secret with her brother Ondra. But since they use the portal on a train, the book ends up getting locked up in a lost and found storeroom at the trainstation. Once back in the real world, the children eventually manage to call their parents who come to their rescue. They don’t believe a word of that story, though.
Based on a story by Jiří Melíšek, the movie was filmed in 1981. Screenplay by Milan Pavlík and Ota Koval. Directed by Ota Koval. 70 minutes.